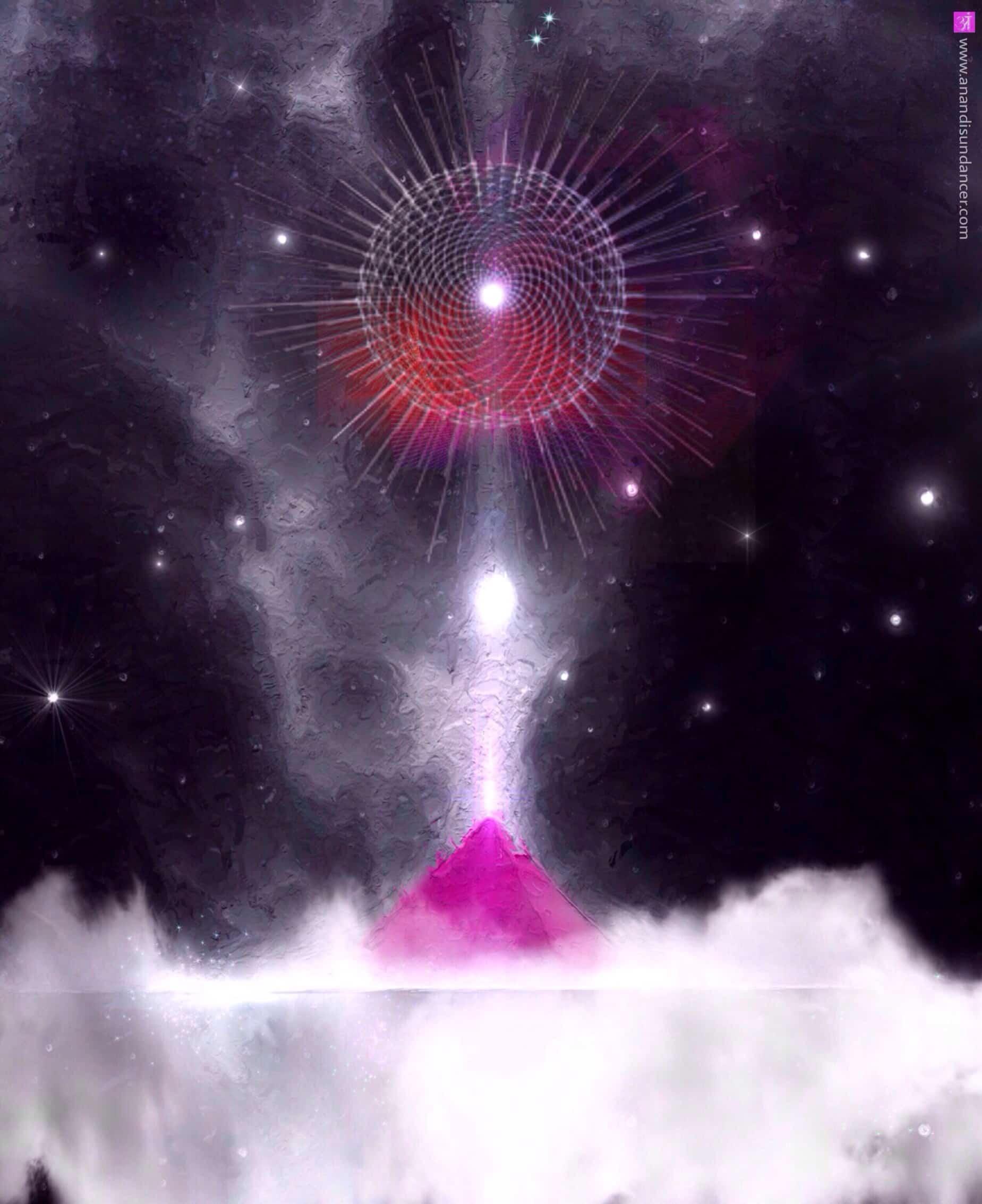 In Theory of Colours, Goethe substantiated via hundreds of duplicable experiments that colour was an observable phenomena that fell outside the limited parameters of of Sir Isaac Newton’s ” Wave Length Theory ” of colour – which found its roots in passing white light through a glass prism to produce the familiar rainbow effect.

One such Goethe experiential phenomena, was the “recurring and unexplainable appearance” of an eighth colour – one which would “mysteriously appear” just beyond Violet – or just before Red, seemingly creating a Colour or Light Loop (Circular) as opposed to a Rainbow (Linear). Goethe named this elusive colour MAGENTA.

KEY INSIGHTS
Comprised of 2 parts Red and 1 part Blue, this tertiary colour lies “hidden” between Red and Violet. Therefore MAGENTA is both the end and the beginning of the Light Spectrum – representing the Alpha and the Omega – the fullest expression of Divine Love. As such, MAGENTA contains or holds all the other colors including the White Light.

Is it any wonder then, that MAGENTA is interpreted by the most ancient teachings of the Great Mystery Schools, as the colour of the 8th chakra – ” The Soul Star ” – residing just outside the physical body, and above the head. In this capacity, MAGENTA contains our individual “Soul Blueprint”, otherwise known as our “Akashic Record”.

Connection to this chakra reveals our reason for incarnating – our Divine Mission – and then further supports our energies to actualize it. If you view the MAGENTA ray as preceding the colour Red, it could be said that the soul descends to body. Conversely, if MAGENTA is seen as following the colour Violet, then the body has ascended to spirit.

A METAPHORIC VIEW
So…which comes first – Red or MAGENTA? Or… which comes last – Violet or MAGENTA? If you see the colour MAGENTA as being in between Violet and Red, you will see the metaphor for Absolution of Duality. It is only possible to experience the living of Heaven (Violet) on Earth (Red), when polarities no longer exist. It is for this reason that the Akashic Record is held in the MAGENTA chakra – beyond duality and the ensuing FALSE judgments this state creates.
It is also important to consider MAGENTA’S complement/opposite – Olive Green. The process of opening ones self to the full potential of MAGENTA, is greatly supported by understanding the energies of its colour complement, and making a conscious effort to keep the Olive Green chakra clear.

Symbolically speaking, an important message is conveyed by Olive Green when Noah is presented with an Olive Branch in the Old Testament, as well as an Olive Grove being the common meeting place of The Christ and his Disciples in the New Testament.
In the case of Noah, Olive Green speaks symbolically to the Hope that “the floods” have transmuted/purified a once corrupt World. In the case of The Christ, Olive Green represents a state of hope that the Disciples can learn how to serve on Earth while residing in Heaven. The Christ said: “Be of the World – not in it”. This is the promise of MAGENTA – simultaneous transmutation and trans-substantion.

POSSIBLE MAGENTA ISSUES
The Aura-Soma Colour System acknowledges both an intense Pink MAGENTA and a very deep form of MAGENTA that looks almost Black without a light source shining through it. There are no issues in the deeper version. The intense Pink MAGENTA on the other hand, is usually indicative of difficulty either achieving a connection with the Divine or believing such a connection is possible. All Red issues however, will either be enhanced or negatively strengthened.

SPIRITUAL BODY MESSAGE
MAGENTA is the closest connection to the God-Head possible, and as such is representative of all things great and small – all of which are of equal importance! In other words, MAGENTA is about tremendous respect for the Sacredness of all Life.
By bringing quality and care to the “little” things in Life, the door is opened for God to bestow the big rewards. This is the creative ray that allows form to manifest.

MENTAL BODY MESSAGE
MAGENTA is the personification of care to often times monotonous, yet precise detail. Further, in this simplicity is found beauty and harmony. An individual that is highly actualized in the MAGENTA Ray may not own much in terms of material goods, but what they do own will be simply elegant.

EMOTIONAL BODY MESSAGE
When one is actualized in the MAGENTA Ray, they know that they are enough, and are capable of self-validation. They are safe and secure in who they are, and they KNOW they are cared for on a much higher level than the physical existence that is apparent. Therefore, they are not swayed by the opinions (judgments) of others. It is this ability to completely detach from all judgment and good versus bad outcomes, that makes them very harmonious individuals both in their personal relationships and in their work environments.

What do you think? Cancel reply

Thank you for visiting my website. My art is available in print of varying size and format. Please enquire in the 'Get Connected' section if you would like to discuss purchasing. If you do not wish to buy art but would like to donate to support the continuation of these daily inspirations please click on the donate button. Your support is greatly appreciated. May we all continue to shine and thrive. With so much Love, Anandi